Seventh-day Adventists are devoted to helping people understand the Bible to find freedom, healing, and hope.

About the Adventist Church:

Christ's Method
THE STORY OF MY MISSION AS A PIONEER

As a pioneer posted to work in Bukunji kebbi state, shanga local

government, under minna district. North central Nigeria conference of seventh-day Adventist church. The people I met in Bukunji are pagan. So they worshipped ldols, in their houses, there are altars of gods, part of their culture women don’t wear clothes,

On my arrival on the 10th of October 2015, I asked the house of the local village head. And I was directed. When I went to the house, he welcomed me and I introduced myself to him and the mission of coming. He gave me an accommodation. In the night I on my laptop and used Jesus film .The whole family watched .The next day the news spread in the entire community. A visitor has arrived and he is a teacher by profession and promised to teach our children literacy and numeracy skills .In the evening the whole community gathered; I began to teach them and also on my laptop thereafter .Little by little they began to asked question; they have been watching the film who is this Jesus? I promised tomorrow I will not teach, but I will talk about Jesus .When I preached and introduced to them Jesus as the saviour of the world, who came and died for our sins .Presently he is in heaven interceding for our sins.

The next day I decided to visit them on their farms and four youth met me and showed their appreciation and said they like appearance my way of life. I told them this Jesus I spoke about yesterday; when you accept him as lord and personal saviour he can change your life.

In the evening they came for normal class. And after the class I told them on Saturday I will tell them more about Jesus. These youth came on that Saturday and we worshipped together with the children of the local village head under a tree. The next Sabbath they also came for worshipped and that is how we started. After two months I invited the district pastor from minna he came and baptised five of them. After a month he came and baptised four.

The district village head heard the news, how his people are living paganism to Christianity he donated 350 by 300 feet of land to build a school and a church, but when local head got to know the youth wants to accept Christianity and worshipped God on Saturday. It was a battle for me, I was alone but God was with me. After two days the local village head the one who gave accommodation, gave me a notice to live his community or else something will happen. As new converts they said since their father owned the community I should go and stay in Agwara and be coming from time to time. I called the districts pastor and told him the problem he asked me to live Bukunji to the nearest station which is Agwara.

While I was in Agwara the conference posted me again to salka in Niger state. The people in salka are predominately Christians and are members of united missionary church of African. I arrived  salka on the 10th of March, 2016. I began my work as a pioneer with tracks sharing because the people are educated. My first converts in salka are women. These women don’t know how to read, but they gave me a listening ears, I organised bible study with them every Wednesday, later I invited them to be coming to my house for worshipped. After a month I invited the district pastor he came and baptized them.

After a month I met an old man of 87 years by named baba Dauda Danjuma. Baba has been listening to Adventist world radio over five years, when I met with him I introduced myself to him and he promised, he will come to my house for Bible study. He came on Saturday after we have closed the service; we sat with baba for about five hours studying the word of God from the Bible. When baba was going I gave baba some tracks and a book called gari ya waye, baba is an indigene of salka  kambari by tribe, accepted Jesus as his lord and personal saviour into the fellowship of seventh-day Adventist on the 2nd  July, 2016. 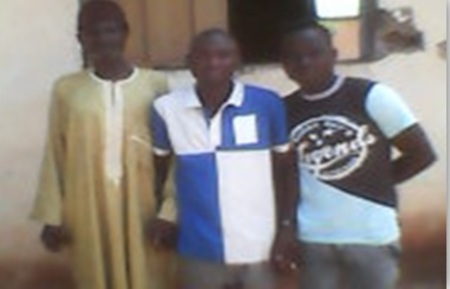 In Bukunji there is no place of worship pastor Monday Bako who is in Agwara has spent some time he did not visit them due to health condition.

In salka we are using the Government Day Secondary School as a temporary place of worship even though global mission has bought seven plots of land, but there is no money to devlop. And the government has given us a date line to stop using the school by December 2016.

Secondly as a pioneer I am facing the problem of opposition, just as I mentioned above united missionary church of African is a barrier to the mission.

Thirdly there is spiritual attack, had been not God I could have lost my daughter, pray for us that God will continue to protect his children as they work in his vineyard.

In 2010, Adventist® Mission became part of General Conference Secretariat—maintaining its own identity, but becoming aligned even more closely with other entities working with the church’s mission program.